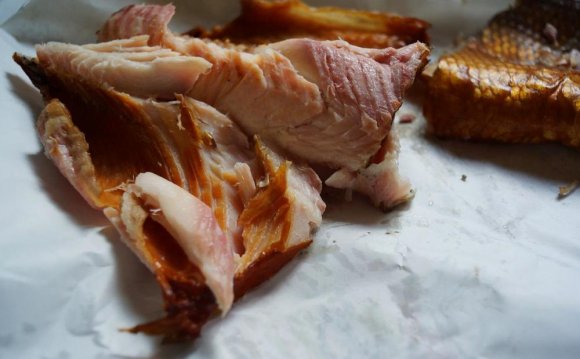 Lots of people think that chowder is a New England thing - but those people don't live in the Midwest. When I was a kid, we used to go camping in Michigan's Upper Peninsula (where Lake Superior and Lake Michigan meet). We'd go canoeing and hang out in Frankenmuth (a little bit of old Bavaria in the Midwest, complete with period architecture, girls in lederhosen, and places called "Cheese Haus"), and we'd always make the required stop at the Shipwreck Museum on Whitefish Point, near where the Edmund Fitzgerald went down. And, being on Whitefish Point, we'd get ourselves some whitefish chowder at one of the fish joints near the lake up there. So whitefish chowder is all about summer for me - and I love to throw a couple of handfuls of fresh summer corn in, to sweeten things up.

This recipe isn't complicated, but the timing is important: you need to follow all the steps in order. The fish, on the other hand, is pretty much up to you: I like to use smoked whitefish, but you could also use smoked haddock, smoked sable, smoked trout - even smoked salmon, though that will, of course, change the color a little bit. This is great with crackers or crunchy bread - or you can go really Midwest and throw in some Goldfish crackers. Chowders are traditionally thickened up with a flour roux, but here I use pureed potato instead. That's because the starch in the potato thickens the soup but doesn't add any weight, so the chowder's a little lighter.

For the potato mixture